Utopia presented a whole new traffic solution and a seamless continuation of the urban plan previously established for the first phase of the area's expansion. Our proposal highlights and builds on existing qualities through such features as a green space around the creek that flows through the area, and strengthens the connection to the adjacent recreational common. Simultaneously, the area will have a clear sense of urbanity with residential buildings that have vibrant street levels that encourage outdoor life, activity and interaction. The proposal covers a total area of 79 580 square meters, about 900 residential units, and 45 800 square meters retail, public venues like a library/culture centre, cinema, swimming pool, gas station and parking.

The area of Nya Hovås is situated midway between the sea and nature areas of Södra Askim, approximately 12 kilometres south of Gothenburg. Close by is the island of Amundön with its rocky salt water bathing spots, as well as the Sandsjöbacka nature reserve.

In its entirety, Nya Hovås will consist of homes, businesses, trade and various types of public service. Combined with the proximity to the sea and nature areas, these are the fundamental qualities and starting points dened in the dialogue process that has been an important part of our work in developing the area. The municipality's vision is to create "a small-scale mixed-use city of world class."

Nya Hovås phase 1 is now in full construction progress and by around 2020, the area will be expanded by approximately 1,300 residential units, both purchasable and rentable, as well as a further 30,000 square metres of commercial space in the form of small shops and offices, creating a total of 1,000 workplaces. The area will also have a primary school and nursery.

The area of Hovås II consists of two properties totalling approximately ve acres, spread partly across the area east of Route 158, currently called "Trafikörat" and partly the area southwest of the Hovås Allé. Today, Trafikörat is an area overgrown with birches that to some extent function as a noise barrier against Route 158 for the residents east of here. Through Trafikörat runs the Krogabäcken creek, which is a protected area for trout. Along Route 158 runs an easement for future public transport. A survey of existing public transport points out the need for a transport hub and commuter parking.

Nya Hovås phase II will make way for further housing and commercial businesses in the area, and expand on the successful concept that is Hovås I. In phase II, the promise of creating an attractive and vibrant neighbourhood will be extended to those living and working in the area. There is a call for innovation and creative thinking on how the area can evolve further. Social and environmental sustainability over time is desired.

The goal is to give the parties one to two proposals to present to the municipality, government agencies, the public and those living and working in the area. The client wishes to find a clear and strong idea to present that, through its keen processing, will also illustrate that it is fully feasible and withstands any circumstances.

The Transport Administration has proposed that the Brottkärrsmotet junction along Route 158 with its so-called "Trakörat" be removed and replaced by two new slip roads in each direction. A passageway under Route 158 will provide a link between the residential areas and the Sandsjöbacka nature reserve. The new traffic solution will create an 85 metre wide zone that cuts through Nya Hovås, cleaving the neighbourhood in two halves.

Based on the given circumstances, we have focused on rethinking the proposed traffic solution with the goal of creating a more coherent neighbourhood. The challenge has been to maximally reduce the width of the motorway zone and create a continuous whole of Hovås I and Hovås II.

We have strived to create a traffic solution that, rather than splitting the community in two, will make the least possible impact on the life quality for the residents. The function of the motorway as a throughway and slip road feeder has been taken into account, while the underpass – Hovås Allé – has been regarded as an important connecting link and access to the urban development.

The potential construction of a tram line and the placement of the lling station have been integrated into the proposal. The unique riverscape with its trout population is a quality and resource that we have chosen to utilise and highlight.

In our proposal for Hovås, we have expanded on the qualities of Hovås I with its mixed buildings, services and various business facilities, as well as access to nature and recreational areas.

Redrawing the city limits with a roundabout
Our proposal for a traffic solution is that a roundabout is built on Route 158, just north of Hovås. Slip roads and consequent intersections are omitted and the motorway zone that splits Hovås in two is minimised.

• The motorway zone that divides Hovås is minimised
• The speed of passing traffic is reduced
• Signposting space for Hovås businesses is increased
• There are significant financial savings to be made in not building sliproads.
Funds that can be used in other ways, such as opening further passageways under the motorway and increasing the links between Hovås and the Oxsjön lake.
• A roundabout also frees up more land to develop

Tramway and express buses
The public transport routes (trams and/or express buses) that pass through the area indicate urbanity. They also create a natural flow of residents from all of Hovås in the area, which will benefit commercial activities and public services.

Cycle lanes and footpaths
Generous pavements, footpaths and cycle lanes have been prioritised. Everyone in Hovås, regardless of age, shall be able to easily and safely move between the homes, services, businesses and recreational areas. Pedestrian and cycle traffic also enhance the sense of urbanity and community.

Public space – a shared space
Infused in the residential areas is a "floor" – a shared space – instead of a road. All sorts of traffic will intermix here – cars, pedestrians and cyclists – everyone moving with respect to one another and thus automatically reducing speeds. (Compare the so-called Skvallertorget in Norrköping).

Buildings with vibrant street levels
A fundamental character trait of an urban environment is that the ground floors of buildings contribute in various ways to the vitality of the city. In our proposal, we have created urbanity, attractiveness and security by varying the density of entrances along the road. In place of commercial spaces, we propose activity centres and attractively designed recycling and waste facilities as well as cycle storage. In addition, we also propose that, in those cases where possibilities for a venue are limited, the ground floors be turned into townhouses. The advantage of townhouses is that we add a sought-after form of accommodation that also provides security and vitality to the street during evenings and weekends. We envision that the road verge of Hovås's first phase also be made available to residents.

Parking
Garages are built beneath the residential blocks and the existing large car park by the ICA supermarket is used for visitors to the swimming pool and cinema.

Despite the motorway, it has been our goal to create a clear and seamless entity of Nya Hovås. Our proposal allows Hovås Allé to run like an unbroken urban street underneath the motorway and into Hovås II. Hovås Allé will in this way create a connecting link between two previously divided parts. Along the main road, building types and functions vary: housing, offices and various forms of recreation and services such as a swimming pool, library and cinema.

We view the creek with its trout population as a central aspect in the identity of Hovås. In our proposal, we highlight the waterway and create possibilities for residents to access and enjoy it. Around the river, we are creating a unique park environment with pedestrian and cycle bridges spanning the water.

Proximity to the sea is what defines Hovås I. In Hovås II, we will create a strong connection and link to the Oxsjön lake and nature reserve. A clearly marked footpath leading up to the lake will therefore be laid. 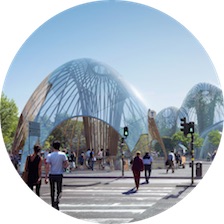